Therefore, we call for action weeks from now on, on one hand to push the topic of the planned eviction massively in the public and to mobilize, on the other hand this should once again give the opportunity to network, to discuss, to learn and to organize.

The action weeks should take place from now until the planned eviction as long and continuously as possible.

For this we need your support!

If you want to organize an info- or discussion event, a workshop or open skill sharing, please write us the dates and publish them yourself on Stressfaktor and other event pages.

Banners can be put up anytime and anywhere, posters and stickers can be put up, flyers can be distributed and soli photos can be published. A drink in your bar/pub could temporarily be called 'Køpiplatz bleibt!' or whatever you can think of, just do it! Also writing solo statements and spreading our info + events, articles and statements help us out! 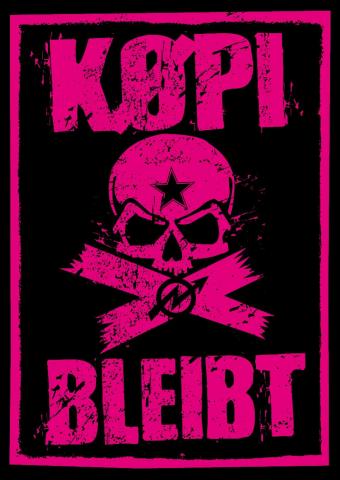 Once again in the last few months we have received another blow to our liberated spaces in the city: the announced eviction title of the Køpi Wagenburg.

And once again we have witnessed the theatrics between the usual politicians and Berlins unscrupulous contractors, who with their bourgeois processes do not want Køpi Wagenburg to continue to exist.

The broader area of Køpi has been for decades, one of the most famous practical symbols for DIY, counter-culture and self-organization, not only in Berlin but also very much beyond it. During this decades Køpi has hosted hundreds of people that seek alternative, collective and non-commercial space and way to live. Køpi is a center-point of the antagonistic counter-culture of the city, and has hosted over the years multiple events – cultural, political and their overlap – that brought together the radical movement. The reputation of Køpi goes well beyond the city, with many bonds with people all over the world, who are connected with the project.

Køpi has been under threat for long periods and for numerous times, but always, together with solidarians has managed to make clear to investors, politicians and media one thing: Køpi bleibt Risikokapital! This time, the attack against Køpi is materialized with the threat to evict Køpi Wagenburg. Since the 10th of June the court decision allows the ownership to evict the area, and throw dozens of people in the streets, destroy their infrastructure, their homes and their collective, self-organized way of living.

The political parties, real estate companies, construction companies, courts… all these public and private bodies and institutions are dedicated to one goal: making as much money and power as possible and distributing this only among themselves.

Political and economic interests in this city are now evidently connected – if not overlapping – and Berlin has now become the ground for a larger, unstoppable project, which goes beyond the single evictions of recent months: the development of a smart city, totally in the hands of gentrification, designed for start-ups of the tertiary sector, that have found a new European capital to exploit.

We understand this process of Gentrification as yet another mega-project, perfectly in line with the extractivism development of contemporary capitalist society, which extracts all the resources of the territory, a process that involves large private interests, national and foreign, the state and finance in its various articulations to grab the resources on the territories against the interests of local communities and the environment on which they depend, distorting the way society can self-organise. Capital today extracts and exploits natural resources, labour, data and cultures; it reorganises the logistics of relations between people, property and goods; it exploits, through finance, all spheres of economic and social life.

And once again we will put our bodies in the streets fighting in all ways to stop it.

In the near future we will unfortunately witness another Day X, in a series that over the past year has seen us take to the streets, occupy the streets, build barricades and defend our liberated spaces.

And for the Køpi Wagenburg we will do it once again.

We will not stand by, we will not let Power close another self-managed space without making our voices heard and our actions seen.

We therefore ask once again to take to the streets with us. We ask all comrades, all those who in over 30 years of history have been in Køpi, all those who want to say enough to this speculative process, all those who simply want to express their anger that day.

We call on the whole city to stop standing by, to come out of their homes where we have been locked for months and start changing things.

We know that we are not the only ones who want to make ourselves heard, we know that many people are fed up with paying exorbitant rents, seeing the cost of living increase, feeling increasingly trapped in the grip of a policy that takes more and more from us.

We know that the history of this city has always had a rebellious face that struggles to breathe and express itself.

So we invite everyone to start fighting.